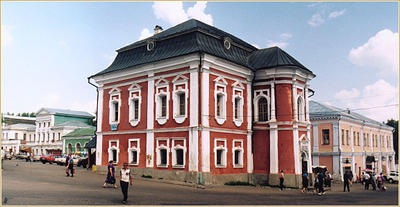 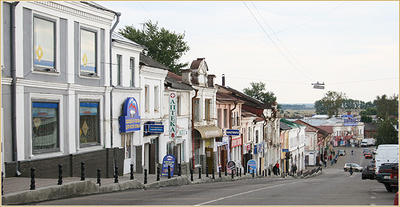 Stock Exchange’s building and rows of shops, the 18th century. 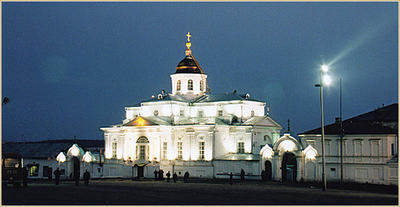 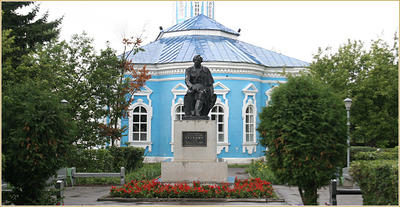 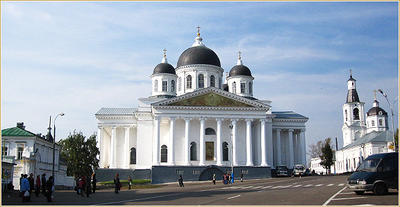 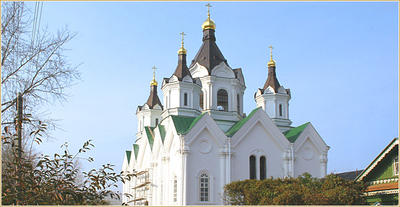 The Cathedral of Madonna's Smolenskaya icon 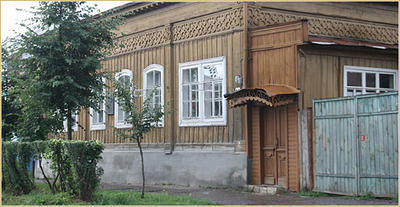 The A.M.Gorki Memorial in Arzamas

Arzamas is the 3d largest town in Nizhegorodsky region, a district's center. It is situated in 110 km to the south of Nizhny Novgorod, 410 km away from Moscow. It is on the right bank of the river Tyosha, (a tributary of the Oka-river). Arzamas is a large railway junction, connecting the central part of Russia with Ural and Siberia.

Arzamas is one of the oldest towns of Nizhegorodsky region, was founded by Tzar Ivan IV (the Terrible) during his third campaign towards Kazan' in 1552. Arzamas came into being as a fortified town at the place of the antique settlement of the nationality Mordva-Erzya. The town-fortress was in duty "to be at the tsar's service". The official date of the town's foundation is considered 1578.

The name "Arzamas" appeared as a merging of the Mordvinian words "erzya" - the Mordvinian tribe's name and "mazy" - red, beautiful, there is another version: the name is connected with two brothers Arzai and Masai, who by the legend met Tzar Ivan with gifts and became the first Orthodox in Tzar’s presence. The Arzamas fortress played an important role in the defense of south-eastern borders of Russian state.

The leaders' names of the peasant wars: Ivan Bolotnikov, Stepan Razin (more than 11,000 of his adherents were executed on Ivanov hills from October 1670 to January 1671 in Arzamas), Emelyan Pugachev are connected with the town's history.

There is the legendary name of Alyona Arzamasskaya, a nun who was in charge of 7,000 insurgent peasants in the course of Razin's armed rebellion in the heroic chronicle of the 17th century. She was captured by the government's troops near the town of Temnikov (Mordovia) and burnt alive. There is a memorial to Alyona in Temnikov

From time immemorial Arzamas and its circuit are famous for craftsmen. The leather making, fur-dressing, fat-melting, felt-making, blacksmith's, harness-maker's, brick-making were successfully developed in the past. Owing to its favourable geographic situation Arzamas became a trading center of Povolzhie, known for selling of bread, onions, poultry, livestock, craftsmen' articles.

By the middle of XVIII century Arzamas had become a junction of 10 highways, among them - 4 of State importance.

In olden days they said:” Arzamas-town is the corner of Moscow” or “Geeze kingdom, onion’s capital”.

The development of trade and crafts led to the appearance of rich merchants of all guilds, who had trading firms and shops not only in the native town but also at the large country's fairs.

The town's image was influenced by the results of the development. Arzamas merchants built churches at their expenses and competed in their embellishment. In the end of the XIX – in the beginning of the XX century there were more than 36 churches and 4 monasteries in Arzamas.

Arzamas is connected closely with the history of Russian literature and culture.

Alexander Vasilyevich Stupin was born in Arzamas, in 1802 he created “little academy” - 1st Russian provincial school of arts. It was the first Russian Art school, where serves also studied, getting not only art, but also compulsory education; it gave Russia more than 150artists.

Arzamas is well-known by its talents who have got wide popularity in Russia. Among them M.S. Zhukova (1805-1855) takes a special place. She is one of few Russian women-writers whose work was admired by the famous poets and writers in the XIXth century.

Vakhterov Vassiliy Porfiryevich (1853-1924), the famous teacher, the author of many scientific articles and manuals was born on the Arzamas land. In the beginning of the XXth century Russia was taught by dint of his "Russian ABC-book", and the book for class reading "The World in stories for children" was one of the most wide-spread in the pre-revolutionary school.

Saint Patriarch of Moscow and all Russia Sergiy (Starogorodskiy Ivan Nikolayevich 1867-1944) and Father Johann (Storozhev Ivan Vladimirovich) - the last clergyman of Tzar Nikolay II were born in Arzamas at different times and got the rudiments of ecclesiastical education.

Arzamas is a native town of architect M.P.Korinfskiy (1788-1851). According to his design in 1842 the stately Resurrection Cathedral in honour of the victory over Napoleon was erected.

Arzamas is a youth town of the children's writer A.P.Gaidar (1904-1941). With the rare moving affection the today's inhabitants of Arzamas keep the memorable Gaidar places - a writer's house of childhood, a gymnasium building, a literary museum of A.P.Gaidar.

Arzamas was a place of M.Gorki's exile (1902). M.Gorki organized the 1st public town library. Nowadays there is a memorial museum in the house.

Arzamas is the town-museum itself. More than 140 historical, cultural and architectural monuments are guarded by the state. Among them 25 have general Russian importance.

Arzamas is registered as one of 116 historical towns of our country, needing special attitude to preservation of their historic legacy
The modern town is an important industrial, agricultural and cultural center of the Volga-Vyatsky region of Russia. Produced in Arzamas special machinery, municipal lorries, aircraft and medical instruments, onion and gypsum from Peshelan' are well-known in the country.
There are 3 higher schools, 7 technical secondary schools, a wide network of schools and educational centers for children, drama theatre, 3 museums (historic-artistic, museums after A.M.Gorki and A.P.Gaidar), exhibition halls, gallery of the art school after A.V. Stupin, a centre of national trades in Arzamas.

The busy roads pass through Arzamas towards Pushkin's Boldino and Diveyevo Convent where the relic of Serafim Sarovskiy are reposed.

Leave for Arzamas, touch the mysterious and charming past of the town, feel its extraordinary attraction. And you will understand what attracted a lot of famous Russian literary men, functionaries who considered their duty to pay a visit to the sacred land of Arzamas.

Only when booking from the site

Nice compliment from the hotel